Will Hehemann | School of Agriculture, Fisheries and Human Sciences 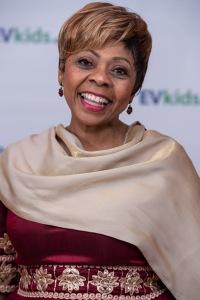 When she was appointed northeast regional director of the U.S. Fish and Wildlife Service (FWS), Dr. Mamie Parker, a 1980 alumna of the University of Arkansas at Pine Bluff (UAPB), had an unexpected moment to reflect on her career and life accomplishments up to that point. Standing before a wall of black-and-white framed photographs of former regional directors, the staff informed Dr. Parker that they specifically wanted to take her portrait in color.

“He told me that the FWS had finally selected the first African American in that position in the agency’s 135-year history,” Dr. Parker said. “At that moment, I got very emotional and thought about the accomplishment and what it took to get there. I also thought about the challenging implications as a leader. It’s OK to be the first at something – but that gives you the responsibility not to be the last.”

Now retired from the FWS, Dr. Parker was recently elected chairman of the Virginia Department of Game and Inland Fisheries Commission. She is also the first African American to serve in this position in the history of the agency.

“My great-great-grandmother Anne was a slave in Virginia – she lived for over 30 years as a slave and 30 years as a free woman,” she said. “I am amazed not only to have Governor McAuliffe appoint me to this commission, but to have a body of colleagues elect me to serve as chair of the commission is an example of what I believe America is all about.”

Dr. Parker’s 30-year career as a fish and wildlife biologist and executive for the FWS spanned a number of positions in different parts of the U.S., including Wisconsin, Missouri, Minnesota and Georgia.

She reflects on her time working in Massachusetts as the northeast regional director as a challenging period during which she broke many barriers. She says the strength with which she has been able to face challenges of adversity in her career stem from the support of outstanding peers and employees in addition to her childhood growing up in the Jim Crow south.

“I was the first little black girl to integrate the third-grade class in Wilmot, located in southeast Arkansas,” she said. “I didn’t realize that this difficult experience would allow me to later survive and thrive in my adult life.”

Dr. Parker said she built up resilience over the course of her career by working in professional environments in which she was the only woman, person of color, and, oftentimes, the only southerner.

“I learned to ignore a lot of racism and sexism but kept moving in spite of encountering resistance,” she said. “The long-term goal is always to get people to know me. To know me is to know most of my people. And then people from different backgrounds can see we are not all so different after all.”

In 2003, Dr. Parker rose to the rank of head of fisheries and assistant director – habitat conservation for the FWS in Washington D.C. In this role, she provided leadership on national projects that included protecting the nation’s coastal resources, as well as protecting bodies of waters from invasive species such as Asian carp and snakehead fish.

As assistant director, she also served as the facilitator at the White House Conference on the Environment. She was presented the Presidential Rank Award, the highest award given to government employees, for her collaborative efforts in leading her staff to assist in the creation of the National Fish Habitat Action Partnership.

Out of her professional rewards and recognition, Dr. Parker says she is most proud of her induction into the Arkansas Outdoor Hall of Fame and UAPB Hall of Fame.

Dr. Parker said her lifelong passion for the outdoors began in Arkansas during her childhood.

“Growing up in rural southeast Arkansas, I spent a lot of quality time outdoors,” she said. “My mother, who was a gardener and angler, loved being outside and instilled those interests in me.”

In high school, Dr. Parker’s biology teacher introduced her to the realities of environmental degradation, and she started to realize she could not take the wonders of the natural world for granted.

“My teacher introduced me to Marvin Gaye’s song ‘Mercy, Mercy Me,’” she said. “In it, he sings about poison and radiation in the sky and mercury in our fish. It was then I made the connection that the fish that we eat were polluted and by human activity.”

Dr. Parker credits her sister, Mack Jewel Grant, a 1968 alumna of elementary education at Arkansas Agricultural, Mechanical and Normal College (now UAPB), with helping her decide where to earn a degree. During her collegiate studies, Grant was a fourth-grade student teacher. Her younger sister just so happened to be one of her students.

“It’s a pretty unique experience to have your older sister as your fourth-grade teacher,” Dr. Parker said. “She would regularly take me to UAPB campus, and she inspired two of my other siblings and me to study there someday. She currently lives in Dermott, Arkansas and is still involved in the UAPB/AM&N National Alumni Association – Southeast Arkansas Chapter, raising money for the university and the UAPB Vesper Choir.”

Dr. Parker went on to major in biology at UAPB, and during her studies was interviewed by Hannibal Bolton, a 1971 UAPB alumnus, who was recruiting students for internships with FWS. She was accepted as an intern but was later shocked to find out the internship would be in Wisconsin and not in Arkansas.

“I called and expressed reservations about not having lived outside of Arkansas before and about the cold weather,” Dr. Parker said. “Hannibal told me, ‘Don’t worry about the weather, we’ll take care of you and throw in some free clothes.’ When I arrived, it turned out the free clothes were uniforms that all employees were given.”

Dr. Parker credits Bolton, her mentor, in addition to professors and staff at UAPB, with helping her overcome her fears and get a jump-start on her career. She ended up completing two FWS internships in Wisconsin and Minnesota.

Her work on the campus of the University of Wisconsin-Green Bay included projects and researching ways to clean up contaminants and pollutants in the Great Lakes and its tributaries. For Dr. Parker, the work was the realization of a dream.

In Dr. Parker’s case, her FWS internships led to job opportunities with the agency. One of her first roles was at the Lake Mills National Fish Hatchery near Madison, Wisconsin. There, she worked to restore local lake trout populations, stock fish at farm ponds and provide recreational fishing opportunities. Dr. Parker completed a master’s degree in fish and wildlife management and a doctoral degree in limnology from the University of Wisconsin.

Later, at an FWS Ecological Services office in Colombia, Missouri, she was tasked with providing ecological recommendations related to federal projects and permits.

“Whether it was a federal project or permit that involved the construction of a boat ramp, bridge or post office, our job was to study the potential ecological repercussions and provide science-based recommendations,” she said. “We offered solutions that would avoid or minimize the impact on local fish and wildlife habitats.”

Similarly, she was later assigned projects in the Missouri Bootheel that involved minimizing the impact to local bottomland forests and swamps and protecting federally-listed species including birds, fish and freshwater mussels.

“My superiors figured I would be a good fit for working in the Missouri Bootheel region because of my southern drawl and ability to relate to farmers,” she said. “I helped farmers sign up for federal programs to take parts of their land out of production and restore wildlife habitat. In return for not growing crops in those areas, the farmers received easements.”

When she worked at the Minneapolis regional office, Dr. Parker was introduced to new ways to make a difference in her profession. There, she provided program and policy oversight in the Great Lakes and Big Rivers states.

“This was the first time I really worked in an office developing policy,” she said. “I was more intrigued by environmental law, and I had the opportunity to understand decision-making on a large geographic scale. As we helped biologists across the region get their projects approved, I learned a lot about environmental law and policies from co-workers and peers about the Great Lakes-Big Rivers region.”

After she was appointed deputy chief of fisheries in the FWS office in Atlanta, Georgia, she noticed an opportunity to protect natural resources in her home state.

“Arkansas lacked an Ecological Field Office,” she said. “This was a big void – biologists from Vicksburg, Mississippi were driving to the state to provide advice on federal permits and projects. We decided federal species should have someone representing them in Arkansas, so we worked with our partners and superiors to open the Arkansas Ecological Services field office in Conway, Arkansas.”

Dr. Parker was promoted to special assistant to the director, now known as the chief of staff, in the FWS headquarters in Washington D.C. In this role, she worked with service programs in all 50 states.

“The new position taught me a lot about egos,” she said. “It also taught me about what was going on in the entire agency and the Department of the Interior, as well as how the executive, legislative and courts, the three branches of government, function. The work can be challenging when you are trying to be a career employee but are working with many political appointees. As a scientist, you must struggle to provide sound science and try to stay out of the politics.”

Years later, when she returned to Washington D.C. to serve as head of fisheries, she found the case of how the FWS dealt with Asian carp to be an example of a politically-charged issue. Catfish farmers used the invasive fish species to control snails in their commercial farms, and at the same time, scientists observed that the fish were being found in other bodies of water and competing with native fish species. The impending decision to add the Asian carp to the injurious wildlife listing meant that producers would no longer be able to import or transport the live fish into the U.S. or across state lines.

“We had to hear both sides, the very competent biologists in the agency with sound science, and industry,” she said. “In the end, the two sides agreed to develop a management plan to control the species and phase out the import and transport of the fish over time.”

Now that she is retired, Dr. Parker works to get youth interested in the outdoors and in science, technology, engineering and mathematics (STEM) career fields,through organizations including the Links, Inc. and the National Wildlife Federation’s Garden for Wildlife Program.

She was featured on the Steve Harvey Show and National Public Radio’s Morning Edition for the Wild STEM workshops she hosts for minority youth throughout the country.

“When I speak to youth, I tell them about my story as a pioneer conservationist and call them to action,” she said. “I ask them to think about the things they can do to better their communities. Several youth have expressed interest in pursuing careers in conservation, marine biology and environmental justice, fighting the environmental inequality that communities of color often face.”

Dr. Parker is a member of Alpha Kappa Alpha Sorority, Inc. and serves on the board of directors for the National Wildlife Federation, Duke University Nicholas School of the Environment, the Student Conservation Association and The Nature Conservancy – Virginia Chapter. In her free time, she enjoys the outdoors and traveling overseas with Pierre, her fiancé.