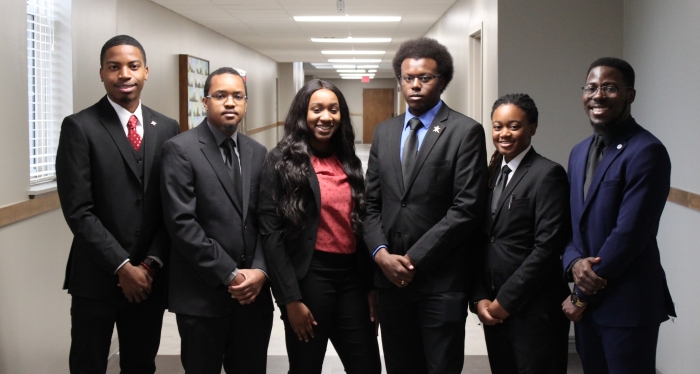 University of Arkansas at Pine Bluff (UAPB) graduates are continuing to build a legacy of professionalism to be proud of for the institution. Each year, students take part in career fairs, leadership conferences, internships and Cooperative Education opportunities with the goal of landing successful careers upon graduation.  The legacy continues with six students who majored in Industrial Technology Management and Applied Engineering (ITMAE) that have accepted permanent job offers with Northrop Grumman in Palmdale, California.  The students were hired in various engineering roles with salaries ranging from $70k-$80k per year.

According to their career coach Tracy Knowlton, the students stayed connected to the Office of Career Services, followed their plan for success, took advantage of every opportunity and achieved the end goal of walking across the stage with a career.

Shadelle Boddy of Chicago, Illinois was hired as a Systems Engineer.  Prior to accepting this role, he completed two internships with the company in Baltimore, Maryland.  Not only did he take part in internships, he was also active in campus activities and organizations as the President of the UAPB student chapter of the National Society of Black Engineers (NSBE) and student liaison for the Youth Motivation Task Force (YMTF) Program.  Boddy was also a member of the Science, Technology, Engineering, & Mathematics (STEM) Scholars program.

Syndey Douglas has been hired as an Industrial Engineer at Northrop Grumman.  During her time at the university, the Chicago, Illinois native participated in an internship with Altria in Richmond, Virginia and had the opportunity to attend the Thurgood Marshall College Fund (TMCF) Leadership Institute.  Her campus involvement included serving as a Student Liaison for YMTF, a member of the STEM program, and the student chapter of NSBE.

Blake Jackson of Chatsworth, California accepted a position as Quality Engineer after completing one internship with Northrop Grumman at their Palmdale location.  He also did two internships with General Electric Aviation in Cincinnati, Ohio.  Staying focused and following the direction of his career coach, Jackson was involved in campus organizations and held various leadership roles including manager for the women’s basketball team, and Keeper of Records for his fraternity.

Terrae Jenkins accepted a position as an Industrial Engineer.  Prior to accepting this role, the Pine Bluff, Arkansas, native completed an internship and Cooperative Education position with General Electric Global Operations in Houston, Texas, and Highland Pellets locally.  As others before her, Jenkins followed the direction of her career coach and was active in campus organizations as a student liaison for the YMTF program and a member of NSBE.

Osaye Maynie of Chicago, Illinois accepted a position as Industrial Engineer Northrop Grumman. He interned with John Deere in Moline, Illinois, Northrop Grumman in Baltimore, Maryland, and General Electric Global Operations in Houston, Texas.  On campus, he once served as Vice-President of NSBE and as a student liaison for YMTF.

Prentiss Royston will join Northrop Grumman as an Industrial Engineer.  Being active as a leader on campus, the Chicago, Illinois native served as President of the STEM Academy, student liaison for YMTF, and Treasurer for his fraternity.  Having also attended the TMCF Leadership Institute, Royston completed internships with Dell Technologies in Austin, Texas, The Greenwood Project, and Option Pit, both his hometown.

One thought on “Six UAPB graduates hired by Northrop Grumman”

Vice Chancellor for Institutional Advancement and Development George Cotton was on KLRT this morning discussing the contributions of Samuel Kountz and James "Jimmy" McKissic. Catch us next week on Good Day Arkansas for another alumni profile.
#Repost @m4gram • • • • • We’re coming to a city near you and we want to hear you play because you can earn a scholarship! Tell your friends that M4 is coming! #UAPB #M4 #UAPBBand
Share the Love. Show Your Pride. Black and Gold is felt inside. Happy Valentine's Day Golden Lion fans! Show your love by giving back today! Visit the link in our bio FMI. #uapbsharethelovefriday #onedayonly
George Cotton, Vice Chancellor for Advancement Development at UAPB is on set at Good Day Arkansas talking about the amazing contributions of Dr. Ruth Jones and Dr. Samuel Massie. #ourprideshows #wetakeprideinlegacy